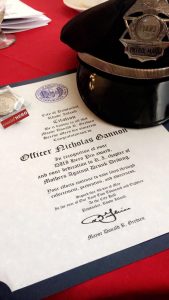 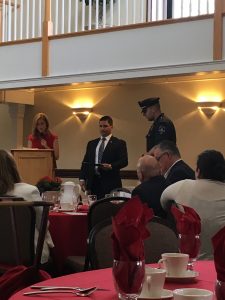 The 2018 Awards Breakfast was held at 7:30 AM at the Cranston Country Club and recognized outstanding efforts and achievements of individual police officers, first responders, emergency personnel, volunteers, public officials, victim advocates and other law enforcement professionals.  WPRI, news anchor, Shannon Hegy served as the MC for the event.

North Providence Police Officer Nicholas Gannon, was presented DUI Achievement Pin.  This award was given to officers who excelled in the areas of DUI arrests, enforcement, awareness and work ethic.  In 2017, Officer Gannon effectuated 18 – DUI arrests, which accounted for 66% of the department’s DUI arrest that year.  In 2016, Officer Gannon successfully completed the very challenging, Drug Recognition Expert (DRE), Training program and was selected to be a DUI / Standardized Field Sobriety Test Instructor for the Rhode Island Municipal Academy.

Colonel Tikoian stated, “There is no doubt, as the result of Officer Gannon’s DUI enforcement efforts, he has saved lives within our community by removing impaired motor vehicle operators from our roadways.  I would like to congratulate Officer Gannon on a job well done, he has brought distinction upon himself and the North Providence Police Department by receiving this prestigious award, something all the residents of our town can take pride in.”