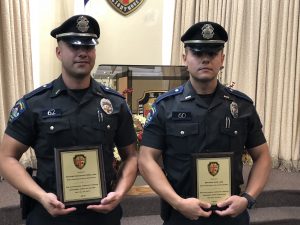 Police Officers from Cranston, Providence and North Providence were recognized for their commendable work in the community.

North Providence Police Officers, Igor Lima and Christian Orellana were among the officers who were recognized for laudable actions while in the performance of their duty.

On March 2, 2018, nor’easter Riley impacted the area with strong wind and rain causing many trees and limbs to fall. This resulted in widespread power outages and property damage.  While on patrol Officer Lima observed an elderly woman waving a flashlight at the front door of her Gillen Avenue home who appeared to be signaling for help.  Upon arrival Officer Lima made contact the 87-year-old homeowner who was suffering from double pneumonia and had lost electricity as well as telephone service.  The interior temperature of the residence was down to 54 degrees, and she was unable to use her cellular phone or activate her Lifeline Alert system to summons assistance.  After ensuring the woman’s safety, Officer Lima made contact her friend, and was able to facilitate a safe, warm place for her to reside until power was restored.  Officer Lima’s situational awareness, alertness and diligence to duty, were instrumental in resolving a situation, which may have resulted in the loss of life.

“As Chief of the North Providence Police Department, I could not be more pleased or prouder with the impressive and valiant actions of these two officers.  Their actions reflect the dedication long associated with the North Providence Police Department’s commitment to enhance public safety.  They are fine police officers who are a credit to the department and their families.  Job well done…”