NORTH PROVIDENCE – Halfway through the calendar year, this town has nearly reached its entire 2018 total for overdose incidents.

Last November, the North Providence Police Department learned of a $5,000 grant opportunity to combat the opioid epidemic, a growing problem that’s hitting North Providence harder than many other communities.

The grant, offered by the Rhode Island Department of Health Drug Overdose Prevention Program, is called CODE, or Community Overdose Engagement, and is offered to municipalities to develop a comprehensive overdose response plan that aligns with the state’s overdose prevention action plan.

On June 3, the department was notified by the Rhode Island Department of Health that its grant application was approved and the department would be receiving the full amount of $5,000 in funding to develop a comprehensive overdose response for the community.

Chief of Police David Tikoian told The Breeze that when he arrived as chief in 2017, he noticed a need for better tracking and created a code in the department’s response management system to obtain and track overdose data.

There were three drug overdoses in December 2017. The monthly numbers for 2018 were consistent with that number, with 36 total for the year. But through the end of June 2019, the department has responded to 28 overdose incidents, putting it on track for 56 at the end of the year.

“As the data shows, it’s an increasing problem,” said Tikoian.

North Providence police officers began carrying life-saving reversal drug Narcan with them on the beat in the spring of 2017. At that time, police said they were seeing between 10 and 20 overdoses each year.

On Tuesday, June 25, members of the North Providence Police Department, including Tikoian, Deputy Chief Martins, Tavarozzi and Calkins attended a ceremony at the Crowne Plaza in Warwick where the department was awarded the grant and also received a certificate of special recognition from Gov. Gina Raimondo for developing a comprehensive overdose prevention response plan.

The opioid overdose epidemic has been a growing concern and labeled as a crisis across the state and nation due to the misuse and overdose of opioids, from prescription pain relievers to heroin and fentanyl, said Tikoian.

“This is a major concern for the public health and welfare of many communities,” he said.

The grant funding will provide the department yet another tool in its box to educate the community on the devastating and potential lethal effects of opioid misuse, he said. Through the North Providence Police Department’s partnership with Tri-County Community Action Agency’s Southern Providence County Regional Coalition, the grant will also facilitate prevention and treatment services related to opioid abuse, as well as treatment strategies to prevent relapses.

“I am proud of the work done by Lt. Tavarozzi and Lisa Calkins. Their efforts were crucial in securing this funding to curb the deadly effects of opioid abuse in our community,” said the chief.

“Last year our community experienced approximately 36 overdose incidents, several of those resulting in death. Having strong partnerships with Tri-County, the North Providence Youth Commission, Fatima Hospital, Rhode Island Department of Health and the North Providence Fire Department, I’m confident our collaborative efforts can make a difference in our town and save lives.” 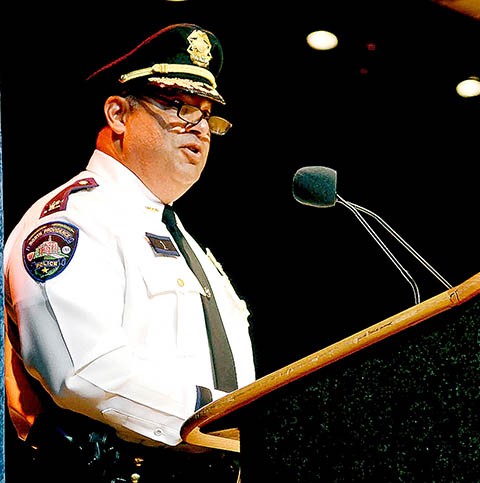 Colonel Tikoian, a retired Rhode Island State Police major, was sworn in by Mayor Charles Lombardi in front of a large crowd.

“I intend to become part of the fabric of this town by being accessible and visible in the community,” Col. Tikoian said. “I realize how important it is to be available and personally interact with our residents.”

For the full story and more photos, please see the article in The Valley Breeze.